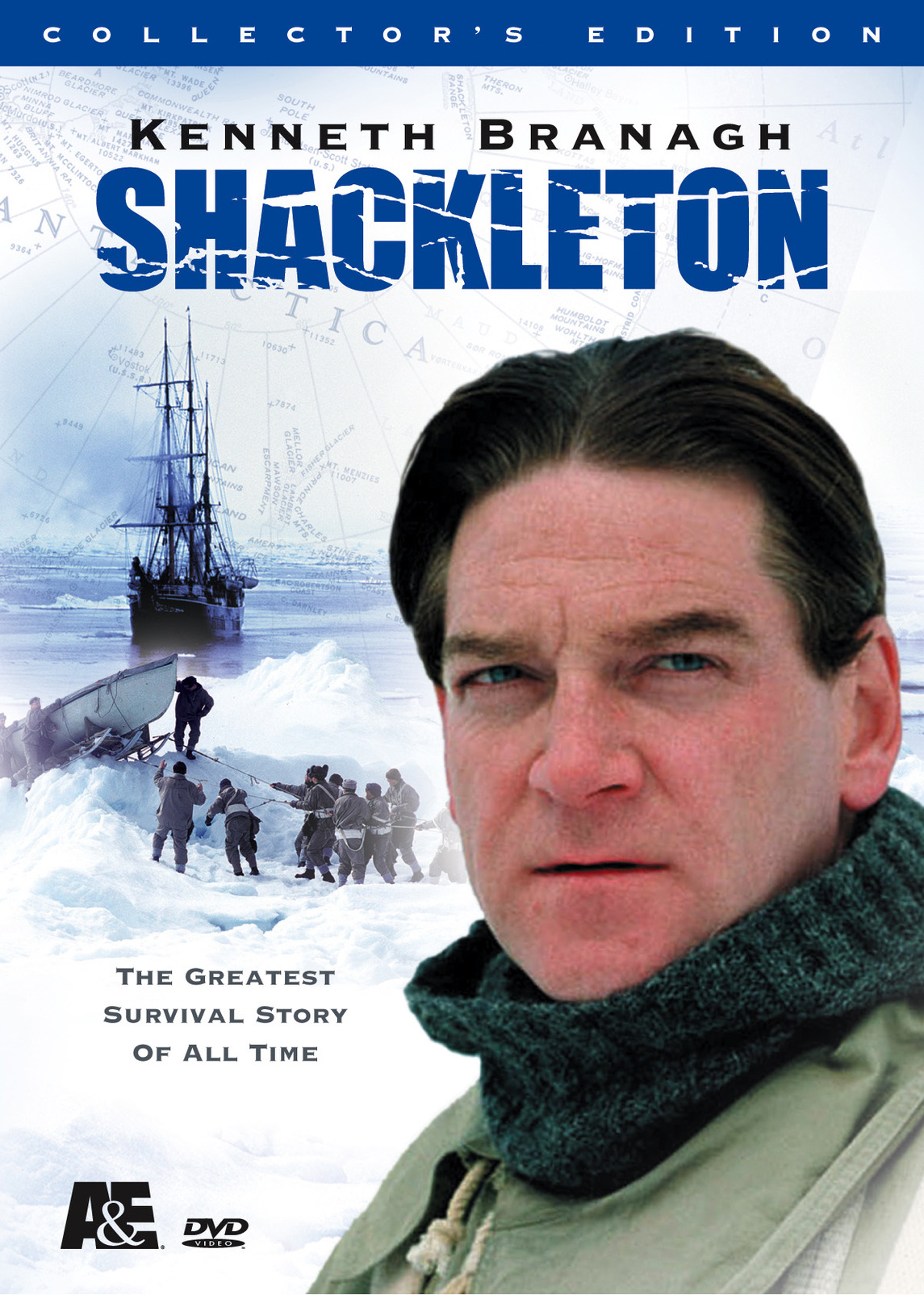 In October of 1915, the great English explorer Sir Ernest Henry Shackleton (1874–1922) ordered the abandonment of the ship Endurance, which had been trapped in an ice floe in Antarctica for over eight months and was beginning to take on water. For Shackleton this meant he essentially had to give up on his great dream of leading his men on the first land crossing of the Antarctic continent. This was to have been the culmination of his illustrious career as an explorer, but now a much greater responsibility weighed on his mind—too me how to get the twenty-seven men of his crew safely back home. Their lives would depend on his daily decisions.

To realize this goal, he faced many obstacles: the harsh winter weather about to hit them, the drifting currents that could pull the ice floe they were to camp on in any direction, the coming days without any light, the dwindling food supplies, the lack of any radio contact or ship to transport them. But the greatest danger of all, the one that filled him with the most dread, was the morale of the men. All it would take was a few malcontents to spread resentment and negativity; soon the men would not work as hard; they would tune him out and lose faith in his leadership. Once that happened, it could be every man for himself, and in this climate that could easily spell disaster and death. He would have to monitor their group spirit even more closely than the changing weather.

The first thing he had to do was get out ahead of the problem and infect the crew with the proper spirit. It all started from the leader. He would have to hide all of his own doubts and fears. The first morning on the ice floe, he got up earlier than anyone and prepared an extralarge helping of hot tea. As he personally served it to the men, he sensed they were looking to him for cues on how to feel about their plight, so he kept the mood light, mixing in some humor about their new home and the coming darkness. It was not the right time to discuss his ideas for getting out of this mess. That would make them too anxious. He would not verbalize his optimism about their chances but would let the men feel it in his manner and body language, even if he had to fake it.

They all knew they were trapped there for the coming winter. What they needed was distractions, something to occupy their minds and keep their spirits up. For that purpose, every day he drew up a duty roster outlining who would be doing what. He tried to mix it up as much as possible, shifting the men around in various groups and making sure they never did the same task too often. For each day there was a simple goal to accomplish—some penguins or seals to hunt, some more stores from the ship to bring to the tents, the construction of a better campground. At the end of the day, they could sit around the campfire feeling they had done something to make their lives a little easier.

As the days wore on, he developed an increasingly sharp attunement to the men’s shifting moods. Around the campfire, he would walk up to each man and engage him in a conversation. With the scientists he talked science; with the more aesthetic types he talked of his favorite poets and composers. He got into their particular spirit and was especially attentive to any problems they were experiencing. The cook seemed particularly aggrieved that he would have to kill his pet cat; they were out of food to feed it. Shackleton volunteered to do it for him. It was clear that the physicist on board was having a difficult time with the hard labor; at night he ate slowly and sighed wearily. When Shackleton talked to him, he could feel that his spirit was lowering by the day. Without making him feel like he was shirking, Shackleton changed the roster around to give him lighter but equally important tasks.

He quickly recognized a few weak links in the group. First there was Frank Hurley, the ship’s photographer. He was good at his job and never complained about doing other chores, but he was a man who needed to feel important. He had a snobbish bent. So on those first days on the ice, Shackleton made a point of asking Hurley for his opinion on all significant matters, such as food stores, and complimenting him on his ideas. Furthermore he assigned Hurley to his own tent, which both made Hurley feel more important than the others and made it easier for Shackleton to keep an eye on him. The navigator, Huberht Hudson, revealed himself to be very self-centered and a terrible listener. He needed constant attention. Shackleton talked with him more than with any of the others and also brought him into his tent. If there were other men he suspected of being latent malcontents, he spread them around in different tents, diluting their possible influence.

As the winter wore on, he doubled his attentiveness. At certain moments, he could feel the boredom of the men in how they carried themselves, in how they talked less and less to one another. To combat this, he organized sporting events on the ice during the sunless days and entertainments at night—music, practical jokes, storytelling. Every holiday was carefully observed, with a large feast set out for the men. The endless days of drifting somehow were filled with highlights, and soon he began to notice something remarkable: the men were decidedly cheery and even seemed to be enjoying the challenges of life on a drifting ice floe.

At one point the floe they were on had become dangerously small, and so he ordered the men into the three small lifeboats they had salvaged from the Endurance. They needed to head for land. He kept the boats together and, braving the rough waters, they managed to land on the nearby Elephant Island, on a narrow patch of beach. As he surveyed the island that day, it was clear the conditions on it were in some ways worse than the ice floe. Time was against them. That same day, Shackleton ordered one boat to be prepared for an extremely risky attempt to reach the most accessible and inhabited patch of land in the area—South Georgia Island, some eight hundred miles to the northeast. The chances of making it were slim, but the men could not survive long on Elephant Island, with its exposure to the sea and the paucity of animals to kill.

Shackleton had to choose carefully the five other men, besides himself, for this voyage. One man he selected, Harry McNeish, was a very odd choice. He was the ship’s carpenter and the oldest member of the crew at fifty-seven. He could be grumpy and did not take well to hard labor. Even though it would be an extremely rough journey in their small boat, Shackleton was too afraid to leave him behind. He put him in charge of fitting out the boat for the trip. With this task, he would feel personally responsible for the boat’s safety, and on the journey his mind would be continually occupied with keeping track of the boat’s seaworthiness.

At one point during the voyage, he noticed McNeish’s spirits sinking, and suddenly the man stopped rowing. Shackleton sensed the danger here—if he yelled at McNeish or ordered him to row, he would probably become even more rebellious, and with so few men crowded together for so many weeks with so little food, this could turn ugly. Improvising in the moment, he stopped the boat and ordered the boiling of hot milk for everyone. He said they were all getting tired, including himself, and they needed their spirits lifted. McNeish was spared the embarrassment of being singled out, and for the rest of journey, Shackleton repeated this ploy as often as necessary.

A few miles from their destination, a sudden storm pushed them back. As they desperately looked for a new approach to the island, a small bird kept hovering over them, trying to land on their boat. Shackleton struggled to maintain his usual composure, but suddenly he lost it, standing and swinging wildly at the bird while swearing. Almost immediately he felt embarrassed and sat back down. For fifteen months he had kept all of his frustrations in check for the sake of the men and to maintain morale. He had set the tone. Now was not the time to go back on this. Minutes later, he made a joke at his own expense and vowed to himself never to repeat such a display, no matter the pressure. After a journey over some of the worst ocean conditions in the world, the tiny boat finally managed to land at South Georgia Island, and several months later, with the help of the whalers who worked there, all of the remaining men on Elephant Island were rescued. Considering the odds against them, the climate, the impossible terrain, the tiny boats, and their meager resources, it was one of the most remarkable survival stories in history. Slowly word spread of the role that Shackleton’s leadership had played in this. As the explorer Sir Edmund Hillary later summed it up: “For scientific leadership give me Scott; for swift, efficient travel, Amundsen; but when you are in a hopeless situation, when there seems no way out, get down on your knees and pray for Shackleton.”